Top 10 places to visit in Amsterdam 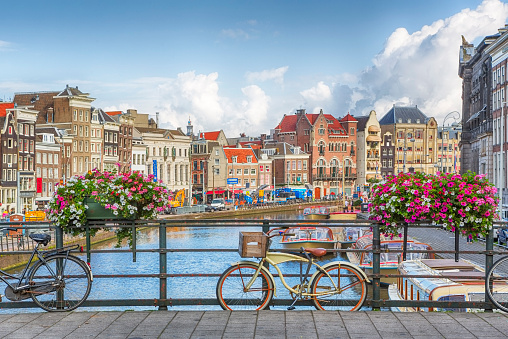 Amsterdam, the capital of the Netherlands, is a city full of culture and things to do, not to be missed during your stay abroad! Here are the Top 10 places to visit during your visit.

Important and famous Amsterdam museum, it houses the largest collection of works by the Dutch painter. In addition to his works (over 500), the museum also houses works by his younger brother Theo and other well-known French artists.

Still used today by the royal family, this palace was built about 350 years ago as a town hall and is an example of Dutch Baroque architecture. Its function as a palace dates back to 1808 thanks to Napoleon Bonaparte. Inside the palace, the museum that tells the history of the city and the country is definitely worth a visit.

You can’t get to know Amsterdam without a canal tour. The canals run through the entire old town thanks to the canal belt, a large ring of water that was designated a UNESCO World Heritage Site in 2010.To visit these areas, you can take a scenic cruise, also available in the evening, or go for a walk or bike ride, which is especially popular in this city.

Oude Kerk is one of Amsterdam’s most famous buildings and probably its symbol. Its construction dates back to 1200 as a Catholic church, today it has become a building of the Protestant faith. Located almost in the heart of De Wallen, the oldest part of the red light district, the church has been restored several times over the years. Today you can admire its unique architecture, the highlight of which is the wooden ceiling.

In the Joordan district, the Anne Frank House is the original flat where the 13-year-old lived through the worst days of her life, which forced her into hiding from Nazi persecution. By visiting the house/museum, you can learn how the refugees lived here, discover the history of Anne Frank’s diary and visit temporary exhibitions on fascism and persecution.

Simply called the Dam, this square is one of the most popular with Amsterdam residents and tourists alike. Here, the history of the city and its modern image are perfectly combined. Visit the Royal Palace and the National Monument, a 22-metre stone obelisk built in 1956 and dedicated to the dead of World War II

One of Amsterdam’s most famous museums and the most important museum of Dutch art. It houses works by Rembrandt and Vermeer, but not only. From painting to sculpture, applied arts to prints, this building houses over 5,000 paintings, 30,000 sculptures, 1 million prints and drawings, all of which are well worth a visit. Heineken Experience: In 1867, Gerard Adriaan Heineken built a brewery in the heart of Amsterdam. Today, Heineken is one of the world’s most famous beers, and the Heineken Experience allows you to tour the old brewery and discover the brewing and marketing secrets that made it so famous; a final tasting is also included in the ticket.

The largest park in Amsterdam and one of the most visited in the country. Opened to the public in 1865 by a group of citizens, the Vondelpark is a popular meeting place on sunny spring and summer days for Am sterdam and tourists. There are small lakes, cycle paths, cafés and pavilions where art and theatre performances are held, sculptures and lots of greenery.

There are plenty of good things to discover in Amsterdam. N’attend plus ! It’s over here!