Top 10 places to visit in Madrid 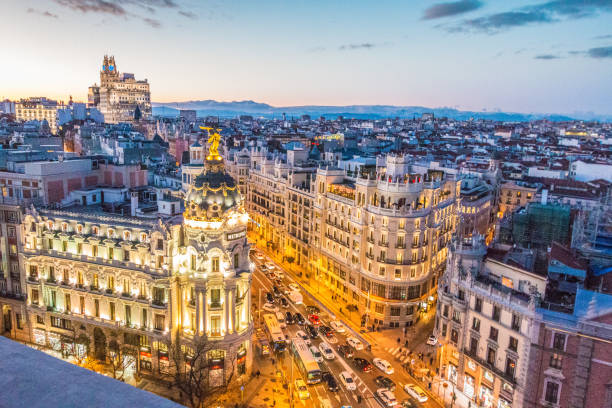 Madrid, one of the most beautiful capitals in Europe and a city rich in culture and leisure activities: here is a list of places that you must see.

Many masterpieces by famous artists are on display, including Caravaggio, Goya, Raphael and Velasquez, to name but a few. The Prado Museum is a treasure trove of art from our continent over the last five centuries.

Europe’s largest royal residence, with 3,000 rooms, larger than Versailles, is a Baroque masterpiece with Neoclassical influences.

It houses valuable collections, such as the Stradivari stringed instrument collection and the collection of arms and armour belonging to the royal family since the 13th century.

This is Madrid’s most unique attraction, an authentic Egyptian temple from the 2nd century BC, transported stone by stone from its original location along the Nile Valley to Madrid as a “gift” from the Egyptian government. Now located in the Cuartel de la Montaña park and surrounded by a river-like pool of water, it is a magnificent sight, especially at sunset or in the evening.

Is the most fashionable shopping street in Madrid and is invaded by citizens, tourists from all over the world and those who want to spend time looking at the beautiful shop windows and shopping of all kinds.

There are also several musical theatres here, which has earned this street the nickname “Broadway of Madrid”.

This square was the site of the city’s market until 1580, but not only that. It is also the site of executions, popular festivals and the most famous Spanish event, La Corrida.

Today, however, it has the appearance of an elegant square 129 m long and 100 m wide and, together with the Puerta del Sol (see point 6), it competes for the role of the main square of Madrid.

This is where Madrid’s New Year’s Eve is held and where the headquarters of the Presidency of the Community of Madrid is located, in the Real Casa de Correo.

Symbolically, it represents the centre of Spain thanks to the plaque indicating “kilometre zero”, the point from which the different national roads radiate from the capital to the most diverse points in the country.

This museum is famous for Guernica, Pablo Picasso’s painting of the atrocities of the Spanish Civil War. While there is no doubt that this painting is the most important, there are many priceless works on display in this museum of modern and contemporary art. You can admire masterpieces by Dali, Miro and Picasso, the three greats of 20th century Spanish painting, as well as works by many important international artists.

The most visited tourist attraction in Madrid after the great museums is dedicated to one of the great passions of the Spanish people: football. The Santiago Bernabeu stadium in Madrid is a true temple of football, where the great victories of Real Madrid, one of the most famous teams of all time, have been celebrated and where the great champions of the history of this sport have played.

This is a 118-hectare green space where you can enjoy a variety of activities: stroll here and there, stop to watch performances by street artists, have a refreshing drink in one of the many bars surrounded by greenery or take a boat ride on the lake.

This is where the world’s best matadors show their skills in bullfights, making it a popular venue for Madrilenians; the Plaza de Toros de Las Ventas itself is also considered the most important bullring in the world.

Madrid is nice! Contact us here to apply for an internship abroad.