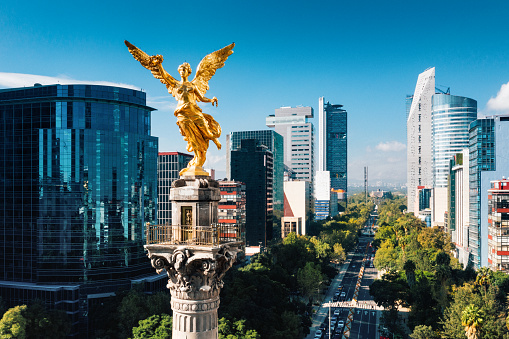 Mexico City is a city full of interesting places and a visit is mandatory during your stay in Mexico: here is a short list to help you choose what to see.

The real heart of Mexico City is its wonderful Centro Histórico, the oldest part of the city and one of the most beautiful historical centres in the world. Here you will find some of the main attractions, as well as beautiful buildings and the remains of an ancient temple, the Temple Mayor (see point 3).

This building, one of the most majestic in the city, overlooks the Plaza de la Constitución. Built in 1524 by the conquistador Hernán Cortés, it is one of the largest Catholic churches in the world, as well as the largest and most important in Latin America

Built in 1524 by the conquistador Hernán Cortés, it is one of the largest Catholic churches in the world, as well as the largest and most important in Latin America

One of the most important pieces of history in the city, located behind the cathedral and near the Plaza de la Constitución. What you can see today are the remains of a large pyramid 60 m high. It was built in 1428, in honour of the Aztec deities Tlaloc and Huitzilopochtli.

What you can see today are the remains of a large pyramid 60 m high. It was built in 1428, in honour of the Aztec deities Tlaloc and Huitzilopochtli.

A wonderful museum not to be missed, especially if you are an art lover. It is a true symbol of the city thanks to its wonderful architecture.

Declared a World Heritage Site, in addition to being an important museum, it houses the opera and the most important concert hall in Mexico.

One of the largest and most beautiful green spaces in the city, stretching to the west of the old town and framing some wonderful attractions.

Divided into three different sections, it is a very relaxing place to get away from it all and enjoy nature, thanks in part to the presence of the great Lago de Chapultepec!

A walk along a section of the Paseo de la Reforma, perhaps the most important and beautiful avenue in Mexico City, is a must. Compared to the Champs-Élysées in Paris, this avenue is full of shops, hotels, restaurants and clubs.

In the central part of the avenue is the Ángel de la Independencia, a monument commemorating the conquest of Mexican independence.

One of the most impressive buildings in Mexico.

This tower is about 204 m high and has 44 floors, inside which are offices, shops, restaurants, hotels and also the Museo de la Torre Latinoamericana. But the most interesting is the Mirador, the panoramic terrace with a splendid view of the whole city, located on the top floor.

Located south of the historic centre, this is the bohemian neighborhood of Mexico City, known for its cobblestone streets and typical colonial architecture.

One of the main attractions of the neighbourhood is the Frida Kahlo Museum, also known as Casa Azul because of the colour of its walls. It is a quiet place, with a beautiful patio filled with plants.

Museo Nacional de Antropología: the most important museum in Mexico! It is located in the forest of the city of Chapultepec, completely surrounded by greenery.

This anthropology museum covers about 44,000 square meters inside and 35,700 square meters outside, spread over two floors and houses the largest collection of pre-Columbian art in the world!

Is an important Catholic shrine and pilgrimage site. It is located on Mount Tepeyac, north of the city centre.

Construction began in 1794 and it is the main Catholic place of worship in Latin America and the most visited Marian shrine in the world.

Mexico is not only about cartels and drugs, it’s also about incredible places so if you want to go to Mexico for an internship click here!