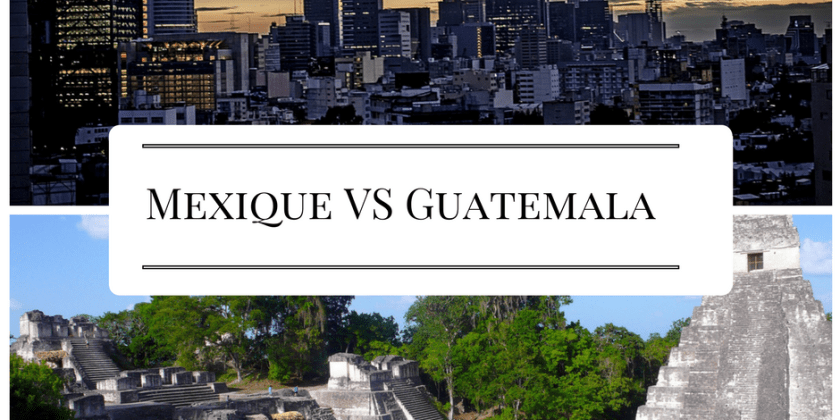 You are passionate about Latin America, you want to do an internship there but you don’t know which country to choose? Read this article about Mexico VS Guatemala and you will finally be able to make your choice!

In Mexico you can visit archaeological treasures, swim in the Caribbean Sea or the Pacific Ocean and discover the traditional music of the Mariachi. This charming country has everything you need to seduce you!

Most of Guatemala is wild, untouched and authentic. Then, the country shelters an extraordinary archaeological site, Tikal, and one of the most beautiful lakes in the world, Atitlán, surrounded by its volcanoes with perfect cones…

Difficult to choose between these two countries? Then let’s go for the macth of the week!

Mexico VS Guatemala : Match 1
How’s the escape route coming? In Mexico, next to the major archaeological sites, there are sumptuous beaches, picturesque colonial cities and breathtaking landscapes. But Guatemala has so much to offer: sumptuous landscapes, active volcanoes, lakes, secular villages lost on the high plateaus…So in the end these are two breathtaking countries! However, in Mexico you will be able to enjoy lively, urban cities that you won’t find in Guatemala, so for outings, head for Mexico Lindo y Querido!

Mexico VS Guatemala : Match 2
On the internship side! In Mexico, the job market is open and growing, many multinational companies have settled there. The tourism, telecommunications and automotive sectors are just waiting for you! In Guatemala the market is less open… The country suffers from poverty and a very unequal distribution of wealth.

Mexico VS Guatemala : Match 3
How’s the language thing going? In Guatemala, Spanish is the most important language, and for most of the population it is the only language spoken. In Mexico Spanish is the official language, but in the big cities it is not rare to hear English, Italian or French, which leaves plenty of opportunities.

Mexico VS Guatemala : Match 5
And for your budget: where do you stand? In Mexico it’s almost half as expensive as in France! In Guatemala it’s a bit more expensive knowing that the average salary is lower, so you’d better save some money !

If you want an internship that brings you experience while enjoying a cultural and festive life, it’s in the direction of Mexico —-> contact us for an internship in Mexico, International Horizons will help you find it!