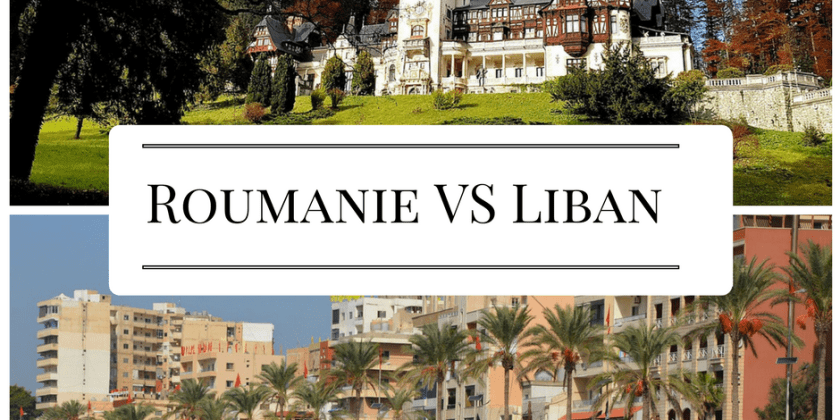 Do you want to do an internship abroad? It is for you the way to come out of it bigger and richer from another culture. Follow our match Romania VS Lebanon and leave for the destination of your dreams!

Romania: this country has many surprises in store for you. The country has been a member of the European Union since 2007. Also, it has been able to combine the modernity of its big cities like Bucharest, Arad or Brasov with a Romanian tradition that can be found in many villages. Indeed it is not uncommon to come across horse-drawn carts on asphalt roads, yes!

Lebanon, this small country at the crossroads of the West and the East is still unknown. It proudly rises from its ruins after years of civil war, between 1975 and 1990, and opens up again to foreigners to reveal its many jewels to you.

Still not convinced? Don’t worry, our match Romania VS Lebanon will convince you, and you will soon be able to make an informed decision about your next internship abroad!

Romania VS Lebanon : Match 1
How about we discuss your budget? Do you want to put as little money into it as possible? Go to Romania and you’ll be delighted (and so will your banker!). Romania has the lowest cost of living in Europe! And yes, it’s half as expensive as in France. In Lebanon, it’s a bit different, the cost of living is only 16% lower and housing, water and electricity are more expensive than in France. It is therefore a country to avoid if you have a tight budget!

Romania VS Lebanon : Match 2
In Lebanon the labour market is very closed…Few people are active, unemployment is high and most young people or foreigners are hired without a contract…Low wages and lack of protection are far from rare, especially since the State does not pay much attention to them, and the labour inspectorate seems to no longer exist…In Romania, a number of French and French-speaking companies are established there and recruit trainees. They are mainly involved in sectors such as finance and accounting, commerce, telecommunications, information technology and communications. There is also a large diaspora of Romanian companies.

Romania VS Lebanon: Match 3
What about distraction? In Romania you won’t be disappointed, between the elegant architecture of the medieval cities of Transylvania, the fairy-tale castles, the painted monasteries of Moldavia, unique ensembles in the world, classified as UNESCO World Heritage Sites. In Lebanon, on the other hand, you will find archaeological sites in profusion, showing you the ruins of ancient civilizations. In other words, you will have more visits to make in Romania. Not only for its cultural heritage, but also for the greatness of this country and all its cities!

Romania VS Lebanon: Match 4
And yes, Lebanon is not just next door! You’ll have to travel more than 3,000 kilometers to get there, about 4h30 by plane. To go to Romania, 2 hours by plane are enough, indeed the country is much closer, it’s only 1,700 kilometers from France! And on the budget side, your banker will once again be delighted that you book a flight to Bucharest rather than Beirut.

Romania VS Lebanon: Match 5
You only speak French and English, are you afraid of the language barrier during your internship? You don’t have to worry anymore. In Romania many companies are French speaking and if not, English is fluent! Moreover, Romanian is a Latin language which is very close to French and Italian. In Lebanon, Arabic is the official language but English and French are widely spoken, especially in the workplace. While in Romania and Lebanon, don’t panic, English and French are still spoken.

So convinced, you already know that your new destination will be Romania? Contact us !

If you want to read more about Romania, feel free to click here 😉