Top 10 places to visit in Helsinki 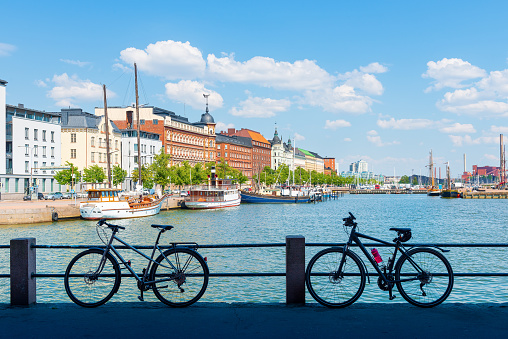 Finland’s first city has a beauty that deserves to be discovered during your time abroad: here is a list of 10 places to visit.

This is the most important building in Senate Square (another place to visit) and one of the symbols of Helsinki, designed by Carl Ludvig Engel. Since 1851, the green domes have dominated the Helsinki skyline and are a landmark of the city. From up there, sculptures of the twelve apostles look out over the city. As the cathedral is a Protestant church, the strict architecture is reflected in the interior. There are no frescoes, mosaics or other lavish decorations: only the organ, the altar and the pulpit stand out.

Is a fortress that first defended the destiny of Russia, then of Sweden and finally of Finland. Today, it is one of the most visited places in Finland, with its beautiful backdrop of pure water, unspoilt nature, 6 museums, restaurants, craft shops, workshops and cultural spaces. It has been a UNESCO World Heritage Site since 1991.

One of the oldest zoos in Europe with over a century of history. Over the years, much has been done to ensure that the areas where the animals live are as close as possible to the natural habitats of the respective species. This is no mean feat, as Helsinki Zoo is home to more than 150 animal species and over 1,000 plant species. The animals are given maximum freedom, even if, for obvious climatic reasons, they cannot always live in the open air.

The Church in the Rock:

The special feature of this building is that it is carved out of the rock in a very modern way. The contrast between the bare stone and the copper dome is splendid, as is the play of light in the stained glass windows and the acoustics. It is therefore not surprising that the church is often used as a venue for classical music concerts.

The capital’s trendiest and most alternative neighbourhood, where artists, workers, drunks and craftsmen live together in an open and tolerant atmosphere. On Saturday nights, young people from Helsinki come here to enjoy the pubs and bars where beer is not too expensive.

With its bulbous domes, covered with 22-carat gold, this church is as important a landmark as those in Tuomiokirkko (see point number 1). But the similarities end there. Uspenski Cathedral is a triumph of Slavic-Byzantine style. It is a remarkable church with a red-brick façade and, inside, a splendid iconostasis depicting the Last Supper.

Finland’s most important art museum with a collection of paintings and sculptures from the late 18th to the mid-20th century. Works of art dating from 1960 onwards are kept in the Kiasma (see next point).

The Atheneum exhibits works by the country’s most important artists: Gallen Kallela, Edelfelt, Simberg and others are all represented here, alongside works by Van Gogh, Cézanne, Munch and Chagall.

The Ateneum is only a few minutes walk from Kiasma, Helsinki’s museum of contemporary art. More than 9000 works of art are on display, representing the best of Finnish and Northern European contemporary art. The building was designed by the American architect Steven Holl in the 1990s.

A typical Finnish tradition. If you want to experience it, there are two places to go: the first is Allas Sea Pool, a spa complex with pools fed by Baltic water, saunas, restaurants, a wellness centre and even some entertainment venues. The other address is Löyly, the only public sauna in Helsinki. It is located 2 km from the city centre and is an extraordinary wooden building with 3 saunas and a sea view.

The market square is a key point to discover Helsinki. Every day the market stalls offer a wide range of products to locals and visitors: fish, seasonal fruit and vegetables, and the best of local crafts such as clothes and furniture.