Top 10 places to visit in Marrakech 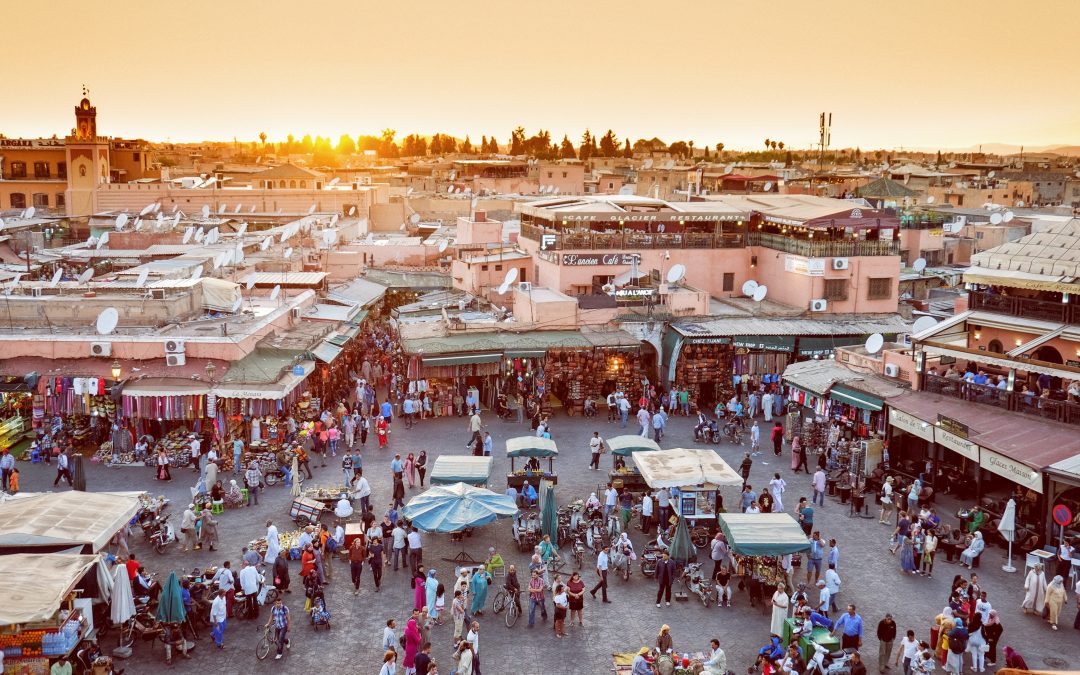 Marrakech: the red city of Morocco makes your dreams come true, between a heavenly swim and a camel ride discover our list of activities.

The Medina of Marrakech :

When you walk through that door I assure you that your only problem is not having enough arms to carry everything home. The walk through the alleys echoing with the sounds of merchants and traders is unforgettable. Your path is lit by an ornate display of Moroccan candles and lanterns, and you find local food and spices, colourful clothing and authentic antiques.

The Palmeraie of Marrakech :

This 14,000-hectare oasis is a natural heritage that you can visit by camel or quad bike. You will see mainly palm trees and agriculture of vegetables and dates. And as a bonus, if you’re a golf fan, you can swing at the PalmGolf Resort on over 120 hectares. So if you want to relax a little away from the city with a panoramic view of the Atlas Mountains, you must visit this area.

You can’t go to Marrakech without visiting this majestic palace. It is the figure of Moroccan and Islamic architecture. For the small history, the vizier of the sultan Abdelaziz Si Moussa built this palace, but it was appropriated by a freed black slave and became vizier in his turn. The latter modified it and gave it its final appearance. If you have the chance to visit the palace you will see the 150 rooms overlooking the inner courtyard. But the most impressive room is the “harem” suite in Arabic, for the women close to the second vizier. And the price is well worth the visit, 10 dirham per visit.

Garden of the Menara :

Built on the edge of a pond to irrigate olive groves in the 20th century. The garden works with a 700 year old hydraulic mechanism. This allows it to bring water from the mountains some 30 km away. If you are looking for a place for a peaceful walk, this is the place for you. You can stroll along the basin and see both the olive trees and the Atlas mountain range. Located only 45 minutes walk from the centre of Marrakech, the garden is easily accessible.

Maybe you want to have fun with your friends and escape the heat for a while? Head to Oasiria, the water park in Marrakech, which covers 10 hectares. Note that this park is ranked first in Morocco. You will have the choice between several activities with water attractions for young and old, including beach volleyball.

So yes, visiting a museum is not everyone’s cup of tea. But this one is definitely worth a visit. Its heart is the former palace that belonged to the minister of defence of Sultan Moulay Abdelaziz. The infrastructure dates from the 19th century and you can see it during the visit of the museum in the inner courtyard. Ceramics, weapons, carpets, lanterns and other authentic Moroccan objects make up the collection of this majestic museum.

The botanical garden is located outside the Medina and is one of the most beautiful in Marrakech. Its particularity is that its former owner is none other than Yves-Saint-Laurent. Despite its presence in the city itself, the ambient noise is non-existent and you will have as a background sound the water flowing and circulating in the garden.

The waterfalls of Ouzoud :

The Ouzoud waterfalls rise to over a hundred metres. They are the most spectacular waterfalls in Morocco thanks to their height and the rainbow that dominates them almost permanently. The environment is surreal, the rock is red and the grass green, not to mention the endless diversity of vegetation. In the Oasis you will see almond trees, fig trees, olive groves and authentic, working oil mills. And if the 150km distance from Marrakech is not enough to give you a change of scenery, you can be visited by local monkeys.

Built in the 12th century, the Koutoubia Mosque is the largest in the city. From the 69m high minaret you will be at the highest point of Marrakech. But like all other mosques, it is forbidden to non-Muslims. So if this is your case you can see it from the outside.