Top 10 places to visit in Seoul 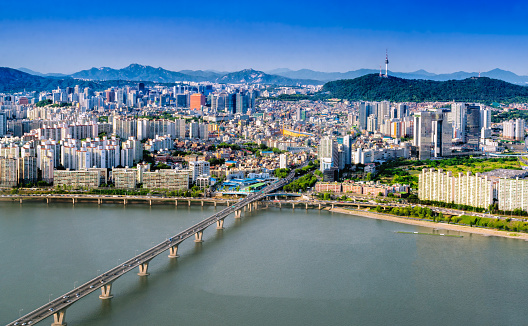 What to see in Seoul? There are countless attractions to visit during your stay in the Korean capital, so here’s a list to help you!

Considered the most important museum in Korea, it is also the largest in the country and the 6th largest in the world. It houses over 220,000 works, including objects, paintings, photographs and more. 13,000 objects are on permanent display, while the rest are displayed in temporary exhibitions in dedicated rooms.

Seoul has five royal palaces dating from the Joseon period, but Gyeongbokgung Palace is the most famous, with its mystical atmosphere and distinctive architecture. The complex includes several buildings that had different functions during the dynasty.

Founded in 1395, is the main Jogye Buddhist temple, the Zen Buddhist sect in Korea.

Surrounded by beautiful century-old trees, it has several buildings, including the main Daeungjeon, which also houses the Seokgamoni statue, several representations of Buddha and rooms with paintings and wooden panels.

This is one of the most traditional and most visited areas. It houses the Gyeongbokgung and Changdeokgung palaces.

There are about 900 hanok, typical Korean houses dating back to 1394, with geometrically patterned walls, dark tiles and wooden doors decorated with lucky phrases.

The N Seoul Tower is one of Seoul’s must-see attractions. Built in 1969 in the heart of Namsan Park and nearly 245m high, it is a television tower that has been open to the public since 1980 and has become a gathering place. It has a panoramic observatory from which you can enjoy a fantastic view.

It is considered the most important natural attraction in Seoul. For a while, it was covered with concrete to build an elevated road, but in 2003, the then mayor Lee Myung-bak launched a redevelopment project to restore the stream. The result was the creation of clean water and a natural habitat in a modern capital city, with the added benefit of cooling the area and reducing pollution.

This famous museum, also known as SEMA, has been located in the centre of the capital since 2002.

With 3 floors of exhibition halls, a library and several rooms with offices and classrooms, it has a collection of 3,500 artworks including sculptures, paintings and installations.

The Korean capital hosted the Olympic Games in 1988 and it is still possible to visit the Olympic Park, which not only houses the largest sports hall in Korea, but is also a popular place for citizens to be outdoors.

It occupies an area of 1.4 million square metres and is home to several monuments and museums, as well as recreational areas.

Is a great place to shop. Covering 6 hectares, it is the largest market in the country, as well as the oldest, and has more than 10,000 stalls selling everything from electronics to jewellery, furniture and much more at very low prices.

Built on top of the existing building, Seoul City Hall is an ultra-modern city hall with a very tall vertical garden (seven stories which earned the city the record for the tallest vertical garden in the world) and a strategic location.

Seoul is waiting for you, so contact us to go on an internship there!