Top 10 places to visit in Stockholm 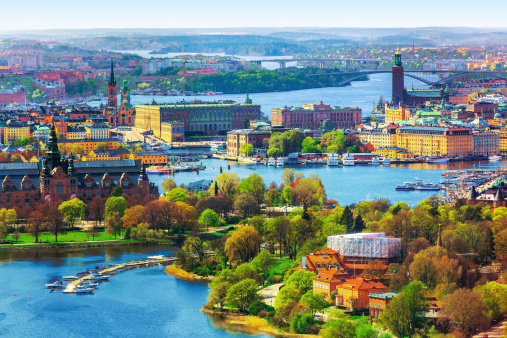 Stockholm, the capital of Sweden, is a fascinating city and a visit during your stay in Sweden is a must! Here is a list of interesting places to visit

Today, it is considered one of the largest and best preserved medieval urban centres in Europe. Visitors can stroll through this picturesque part of the city, discovering monuments as well as restaurants and shops.

The district is made up of narrow streets lined with typical pastel-coloured houses, the calling card of a unique urban area.

Royal Palace: with over 600 rooms, it is considered one of the largest buildings in the world. It is the royal residence and a cultural and historical monument.

The interior is a triumph of Baroque and Rococo and today the main ceremonies and state visits take place here. A large part of the huge palace is open to tourists, who have access to many rooms.

Named after St Nicholas, this five-aisled church has a unique blend of Gothic and Baroque styles (especially Baroque, as it was almost entirely rebuilt in the 18th century), which it shares with the neighbouring Royal Palace. Until 1873, the coronation of the Swedish royal family took place here.

Open to the public since 1928, the building housing the municipal library was designed by the Swedish architect Gunnar Asplund and is an eye-catcher. Inside, it develops in a circular fashion and gives the feeling of a real whirlwind of books! It was designed as a representation of the human mind

It was designed as a representation of the human mind

In Stockholm’s Globe City district was built this arena, which from a distance looks like a giant white sphere, but is actually the world’s largest hemispherical building (its diameter measures 110 metres!).

At the foot of the arena is the entrance to the Skyview:

Two small glass and steel spheres follow rails to the top of the hemisphere, 85 m high, offering a classic panoramic view of the city from above.

A huge nature reserve in the centre. Once the king’s hunting ground, Djurgarden is now Stockholm’s urban national park par excellence. It consists of two parks separated by the Djurgårdsbrunnsviken, a canal where you can swim in summer and ice skate in winter.

This is the oldest open-air museum in the world, but it also has a zoo, making it a great place to spend a relaxing day. You can walk through Sweden’s historic buildings in miniature and see typical Nordic animals such as bears, lynxes, elks, wolves, seals and wolverines live.

Home of the Swedish royal family, it was declared a World Heritage Site in 1991, along with the large park that surrounds it. It is an entire complex and the visit is not limited to the royal building, but also includes the gardens and the different structures that are part of it, such as the court theatre, the baroque garden, the English garden and the Chinese pavilion.

Another place that underlines the fun and lively character of Stockholm is one of the favourite places of the locals and Swedes, the amusement park.

On the island of Djurgården, opened in 1883, this venue also hosts numerous concerts held periodically throughout the year.

With more than 130,000 works by contemporary artists and great names from the past, it is not only one of the most important museums in Europe but also innovative in its approach. The collection includes works by contemporary artists in a wide range of fields (sculpture, painting, photography, media installations) and great artists of the past, including Matisse, Kandinsky, von Dardel, Dali, Picasso and Derkert.

Wow, Stockholm is pretty cool, isn’t it? If you want to go on an internship in Sweden click here!