Top 10 places to visit in Tallinn 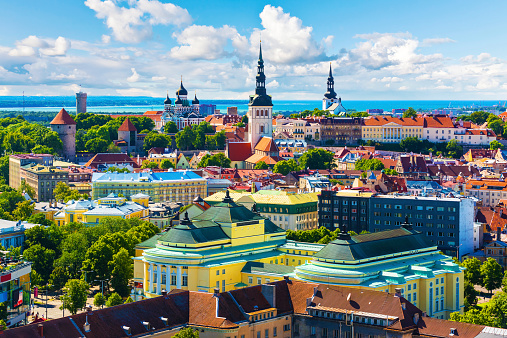 Tallinn, the capital of Estonia: small but with a lot to see, it is the ideal destination for a trip during your stay abroad. Here is a top 10 list to help you decide what to visit.

This is the heart of the old town in the Estonian capital. It is not only the oldest civil building in Tallinn, but also the only Gothic building in Northern Europe. Today, the Tallinn City Hall no longer plays any political-administrative role but hosts receptions, ceremonies and a museum telling the history of the city.

From 1200 to 1500, Tallinn was a flourishing commercial centre, the traces of which can be found mainly in the Old Town. Churches, palaces, fraternity houses and street names have remained virtually intact, as they were when all trade with the North Seas necessarily passed through here.

Is a beautiful park and palace located just outside Tallinn’s Old Town. In the elegant red and white mansion inspired by 18th century Italian villas, Tsar Peter the Great and his wife Catherine spent their summers just after the Russian conquest of Estonia.

The Museum of Foreign Art (Italian, Russian, German, Dutch and Flemish paintings) and the KUMU, the National Art Museum, which houses the largest collection of Estonian art in the country.

A mythical site in Estonia and an ideal place to enjoy a beautiful view of the rooftops of Tallinn’s old town. At the top you can visit the remains of the castle, the Alexander Nevsky Orthodox Cathedral and the Toomkirik, the oldest church in Estonia, which gives its name to the hill. Still the political centre of the Baltic country, the hill now houses the parliament and government buildings.

From the (almost intact) walls that defended Tallinn, about 20 towers remain, almost all of which are used as restaurants, hotels, museums and other destinations. The two most famous are “Fat Margaret” (Paks Margareeta) and the “Peek in the Kitchen” (Kiek in de kök).

The Basilica of St. Nicholas of Bari :

Is one of the oldest places of worship in Tallinn. Today, the Orthodox-style church is known more as a museum of religious art and an auditorium with perfect acoustics where classical music concerts are held.

As Tallinn is small, even without meaning to, you will find yourself on these two streets several times. Along Pikk Tanav you will find the palaces that used to house the guilds, the guilds in which the city’s merchants met. Vene Street is famous for St Catherine’s Passage, a small arched street lined with old buildings and craft shops.

Is an Orthodox-style cathedral built between 1894 and 1900 during the reign of Russian Tsars Alexander III and Nicholas II. Although it is not loved by the Estonian people as it represents Russian rule, it is an impressive and wonderful building not to be missed.

Built around 1400, it is one of the oldest pharmacies in Europe still in operation. Located in the picturesque old town at number 11 Raekoja Street, the pharmacy has retained its original furniture and equipment, making it a fascinating place to see, as is its typically medieval structure.

A colossal structure, 314 m high, offering a breathtaking view of Tallinn and its surroundings. The view extends over the old town, the Baltic Sea and the Muuga Forest. The observatory is located on the 21st floor, at a height of 170 m and has a glass floor. To get there, a high-speed lift takes only 49 seconds to reach your destination!

So we agree you want to go now! Contact us>here to go abroad.