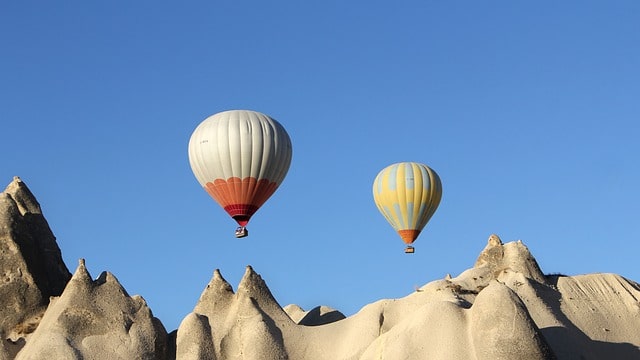 Hello there! International Horizons has been cordially invited to the 3rd International Symposium on the Future of Youth Employment in Europe; we have decided to report to you every day, so that you too can live this adventure!

To set the context, after leaving Nantes at 7.40 am, it was at … 01 am that I fell asleep at the Hilton in Kayseri, not without the pleasant surprise of discovering that I share my room with a Turkish companion (who is a volunteer teacher). Episode past, the alarm clock is a bit complicated but I end up getting on board, in time to start this day which promises to be splendid! Not without having of course caught a Family Caratroc, and that’s quite normal.

The scenery is perfect: sunshine, view – partial – on the snow-covered mountains, all in the most recent of Turkey’s universities. Let’s go bae!

And there such has suprise! I arrive in a large room flooded by the equivalent of NRJ, with a lot of colors: the PussyCats just have to behave, the Eurasian competition is coming hard! Electro, house music follows: even the WareHouse from Nantes could have come here to take a few lessons — > it only comes as a child and #Régisdu44?

A small problem!
First faux pas though – from my point of view, I don’t want to create a diplomatic incident – but I don’t see a single European flag. Turkish flags yes, but European: 0, wallou, quedechi! Well, and for an event largely financed by the European Union, in favour of the future of European youth, I have to admit that I feel a bit sorry for it.

The importance of soft skills
Some explanations are given on Youth Partnership Protocol (Google is your friend!) and the National Tool Fair, we start the Turkish national anthem (still no Europe!) and there friends.e.s, Bernard, director of the French Agency of ERASMUS slaps us a speech in impeccable English with some pop references and he sets one for GOT: I’m already a fan of the character!

Then his Turkish counterpart, who is roughly in favour of a state-sponsored erasure for young people in favour of multisectoral partnerships (schools + companies). He is a little bit worried about the job revolution and the inability of today’s school systems to meet the challenges of tomorrow’s jobs: I can only approve and applaud with both hands. When will the generations who start school learn code, SEO, image control on the Internet, etc.? In our society, this is just as important as knowing how to count today!

He raises the legitimate question of learning soft skills (emotional intelligence) – which by the way, and here I’m putting on my recruiting cap, are essential: I don’t have a number 10 in my team who doesn’t cry when he watches Mufasa mgl!

The President of the University insists once again on the importance of involving companies in education and learning: only they can guarantee the skills sought after on the market. He wishes to insist on entrepreneurship and the social and goes further by talking about societal. Then Alejandro Crawford took the floor to go into a little more detail on the previous speeches I have given you. The relevance was no less important!

Here again, we discuss the importance of soft skills, emphasizing the new trends sought by recruiters: empathy, stress & time management, positive attitude and proactivity. This is the end of the leader and the beginning of working together. Finally, I would almost qualify this speech: a team without a leader, or even with only one leader is impossible (Hi Melenchon!). I think that leadership must be specific to each one in the measure and importance of his skills. Let’s not kill leadership before managing it properly! The speaker here proposes to rethink training by involving companies, and by developing the practical rather than the theoretical. Why not teach a kid to garden after all rather than tell him about Marignan? I take this example from AU HASARD, we don’t get carried away, I’m a fervent supporter of History classes! To be precise, it actually offers intense bootcamps where we value learning all together rather than a top-down system.

Bim bam bam!
Here, guys, new speaker: the Management Melenchon! So revolted, I thought it was his brother: and I say wallah! Basically, we’re getting a good moral on the asshole consumers that we are and who miss our dreams. You add to that the cliché of “you’re all selfish” and you get the man. However, he asks 5 questions, which make sense to me:

1/ Why do we produce leaders when we need thinkers? We do need both, and I share this view of exacerbated leadership.

2/ Where’s the imagination? That’s no, it’s hyper unfair when I see the current effervescence of young people, and the digital and medical revolutions that are underway.

3/ How to make differentiated education? TOTALLY AGREE BRO! We don’t all have the same needs, yet from Lille to Bastia, it’s the same for everyone. It’s a pity especially when we see the dazzling increase in distance learning courses, it’s time to wake up education and rethink it.

4/ What is the most precious thing? The answer is: it’s us, as individuals. Disagree, for me, the Others. Without the Others, we don’t build ourselves, therefore no individual.

5/ What is your dream? He makes the observation that few people have dreams!

Come on, that’s it for me, I’m slammed, more tomorrow, and for questions, put us a com’ on FB or an email, it will be a joy to answer: the kiss from Kayseri, the city of my former intern, Sibel: it’s for you this one!