Top 10 places to visit in Baku 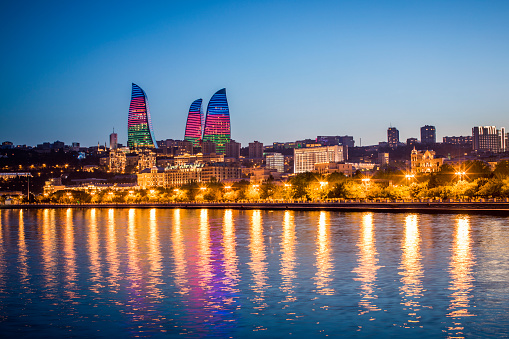 Baku: a futuristic and fast-developing city that deserves to be visited during your stay in Azerbaijan. Here is a list of attractions not to be missed

Flame Towers: the city’s latest landmark since 2012, these three flame-shaped towers become huge LED screens at night, showing various animations, until they are devoured by a huge blazing fire. The towers are always visible from the bay and the centre and create an alienating contrast with the colours and atmosphere of the city.

Heydar Aliyev Cultural Centre: designed by the Anglo-Iraqi architect Zaha Hadid, it is a national symbol of Azerbaijan and of the brilliant modern Baku.

The building stands on a huge green lawn surrounded by fountains in a suburban area not too far from the centre, and is totally astonishing in the beauty and fluidity of its ‘continuous wave’ forms.

Baku Boulevard: the heart of the Azerbaijani city’s nightlife, experienced at all hours of the day, always full of people and beautiful things to do and see. Dotted with clubs, bars and restaurants, as well as exclusive shops, Baku’s promenade is undoubtedly the capital’s most attractive boulevard and the ideal place for a leisurely stroll, thanks also to the manicured flowerbeds and fountains, exhibitions, hedge sculptures and exotic plants.

Old Town: the heart of Baku’s historic centre, surrounded by ancient walls. The magic of this place lies above all in the combination of styles (from classical to rococo, gothic and baroque) that blend and are in perfect harmony with each other. Declared a UNESCO World Heritage Site, Baku’s Old City is home to most of the capital’s sights, even though it is now uninhabited.

Shirvanshah’s Palace: in the historic centre of Baku is this palace, another of the country’s UNESCO World Heritage sites. It was the residence of the rulers, and is now a complex comprising the palace itself, the Diwankhana court, the courthouse, the Shirvanshah burial vault, the mosque with its minaret, the hammam and the mausoleum of Sayid Yahya Bakuvi.

The Bibi-Heybat Mosque: it was rebuilt in the 20th century, on the model of the 13th century, destroyed in 1936 by the Bolsheviks. It is located on the road to Baku, along the Caspian Sea, and behind it is a hill used as a cemetery. It may look anonymous from the outside, but the inside will surprise you.

The Maiden Tower: now detached from the rest of the old city, this mighty structure is the symbol of medieval and pre-Islamic Baku. The legends surrounding it have their roots in the Zoroastrian fire cult, but are more likely to be due to a linguistic misunderstanding: never touched or destroyed by enemies, the tower was referred to as a virgin.

The new city: The old city is lined with tree-lined boulevards, fountains, Gothic, neoclassical and eclectic palaces, as in the great European capitals. Built with the same yellowish stone as the desert sand, but with gables, pilasters, pinnacles and three-lobed windows. Today, many of them house the most famous international high fashion boutiques.

Baku’s Ateshgah: once used as a Hindu and Zoroastrian place of worship, it is a castle-like religious temple. “Atash’ is a Persian word that translates to fire, and in fact the particularity of this place are the ever-lighting flames and the rooms that narrate scenes of daily life as well as historical episodes related to the Zoroastrian period.

The Metro: It is worth visiting for the peculiarity of some of the stops, which are very elegant and almost resemble ballrooms, mixing traditional Azeri decorations and Soviet style, as in Elmler Akademiyasi.

The other merit of the Baku metro lies in the melodies chosen to announce the names of the stations. A 10-second piece of Azerbaijani musical heritage is associated with each stop, linked to the meaning of the station name.

So, are you interested in Baku? Don’t hesitate to contact us pour en savoir plus for more information.