Top 10 places to visit in Berlin 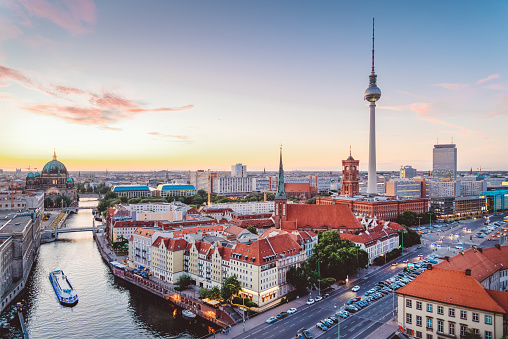 What to visit in Berlin when you’re abroad? There are many points of interest, so here is a list of the must-see places in the German capital.

It is impossible to visit Berlin without passing by Alexanderplatz. The square, the symbol of the German capital, is located in the centre of the city and is easily accessible by all means of transport. Located in the Mitte district, the heart of the former East Berlin, the square is a place of monuments, famous buildings, shopping centres, pubs, lounge bars and restaurants.

Just a few metres from Alexanderplatz, the TV tower is a must-see attraction in Berlin. Visible by day and night, the tower is characterised by its obelisk-shaped structure, topped by a three-quarter height sphere. The 368-metre-high building also houses a restaurant that rotates 360 degrees, offering a unique experience with a breathtaking view of the capital.

This building is striking in its grandeur, perfection and architecture. The heart of the political and diplomatic life of Germany and the European Union, the district is dominated by a huge park, the Tiergarten (which gives its name to the whole area) where you can enjoy a few hours of absolute relaxation.

a symbol of the city since the Second World War and demolished in 1989, the wall stretched for 170 km and was 10 metres high, dividing the American and Soviet parts of the city. It was impossible to cross the border, as evidenced by the hundreds of deaths who tried in vain. Today, only 1 km of concrete remains intact in the city.

In 1990, to celebrate the reunification of Germany, dozens of artists decorated the wall with murals and works of art, which have since become famous around the world; this section is known as the East Side Gallery.

The capital’s most important church, overlooking the Lustgarten and bordering the River Spree. Over the centuries, the cathedral has adopted different styles: initially it was designed according to the Baroque canons, then it was transformed into a neoclassical church and, in 1894, into a neo baroque style.

The history of the city is inseparable from the events of the Second World War and Nazism. That is why this memorial to the European Jewish victims of the Holocaust stands in the centre.

One of the most beautiful palaces in Berlin. It was the summer residence of Queen Sophie Charlotte, who gave her name to her huge palace and the entire Charlottenburg district. The marvellous gold and silver rooms and the porcelain hall, entirely decorated with Chinese porcelain, are worth a visit.

One of Europe’s largest zoos, located in Tiergarten Park. It houses entire families of animals including pandas, elephants, lions, giraffes, penguins, birds, chickens, owls, seals, monkeys, etc… The structure has two entrances: the lion gate and the elephant gate. Inside the zoo you can also visit a huge aquarium.

This is the main shopping street, frequented every day by thousands of visitors and Berliners. It is impossible not to pass through this street, not least because it is home to the Hard Rock Café, a fixed appointment for the average tourist. The street is lined with mega shops (especially the Europa Center) and numerous restaurants, from the usual fast-food joints to more characteristic establishments.