Top 10 places to visit in Riga 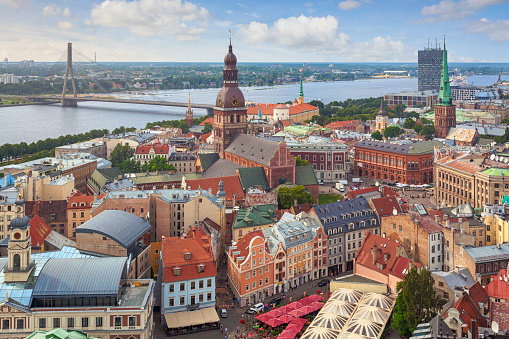 The capital of Latvia is a small city, but it is full of interesting places to visit during your stay abroad. Here are the top 10 things to see!

Riga can be divided into two distinct areas: the Old Town (Vecriga) and the Modern Town (Centrs). The Old Town retains the typical structure of the years 1600-700, when Riga was part of the Hanseatic League and played an important role in Northern European trade. Recognised as a UNESCO World Heritage Site, Old Riga is a collection of narrow streets with the spires of the cathedral as a constant landmark (see point 3).

Recognised as a UNESCO World Heritage Site, Old Riga is a collection of narrow streets with the spires of the cathedral as a constant landmark (see point 3)..

Is characterised by an abundance of about 800 Art Nouveau buildings; it is the capital of Europe with the most buildings of this architectural style! Walking through the streets of the district, you will notice a host of stucco spirals, statues, floral decorations, human faces, majolica and extravagant towers adorning the entrances and facades.

Located in the historic centre of the city, it was built in 1211 and is today the most important Protestant church in Latvia. Its style is a mixture of Romanesque, Gothic and Baroque. The interior is very austere, according to the Lutheran tradition, but you can admire decorated stained glass windows, a wooden pulpit and an interesting altar. The church has one of the oldest working organs in the world, with over 6,700 pipes.

Now the seat of the presidential residence of the Republic of Latvia, this castle overlooks the Daugava River. It is a classical medieval fortified building dating from 1300 and restored in the 19th century. It houses two important museums: the Museum of Foreign Arts and the National Museum of Latvian History.

Between the old town and the centre there is a large green area in the centre of which stands the Freedom Monument. It is a 42-metre high column, at the top of which stands a female figure, nicknamed Milda, who embodies the symbol of freedom, and who holds in her hand three stars, each symbolising the three historical regions of Latvia: Urzeme, Vidzeme and Latgola.

Three stone buildings, similar to each other but dating from three different periods: the oldest is medieval and dates from the 15th century, the other two are Baroque and were built in the 17th and 18th centuries respectively. The difference in colour and style creates an extraordinary and unique harmony between the three buildings.

To the south of the Old Town, you will find an area that has always been inhabited by Russians and is reminiscent of a Soviet city.

The main attraction of this area is the central market, structured in 5 hangars where Zeppelin airships were once built, and it is the ideal place to get a glimpse of local daily life.

The most beautiful building in the Town Hall Square, named after the guild of German bachelor merchants active in Riga as early as 1300. The rich and happy young merchants organised events here, which were also attended by the other inhabitants of Riga.

The building is in fact a reconstruction completed in 1998 as the original was destroyed by a Nazi bombing in 1941.

Beyond the Vansu Bridge, there are two semi-unknown but beautiful districts.

In Kipsala you will find cobbled streets, old houses overlooking the sea, silence, greenery and tranquillity, but also, here and there, designer houses built by people who chose this area to build a home away from the hustle and bustle of the city centre. The Kalnciema district, with its pastel-coloured wooden houses, looks more like Sweden than Latvia.

The Kalnciema district, with its pastel-coloured wooden houses, looks more like Sweden than Latvia.

Nicknamed Gaismas Pils, or Castle of Light, it is the symbol of the more modern face of Riga. The imposing glass and steel structure is 67 metres high and has 13 floors, housing around 4 million ancient and modern books.