Top 10 places to visit in Sofia 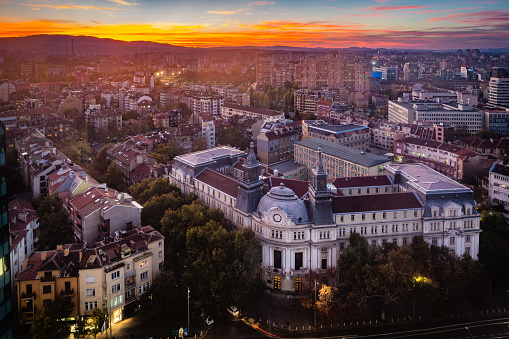 During your stay in Bulgaria, a visit to the capital Sofia is a must, so here is a list of 10 places to visit.

This is the most important religious site in Sofia and a symbol of the capital. The cathedral is dedicated to the Russian hero Nevsky in gratitude for Russian intervention during the struggle against Turkish rule.

Built between 1898 and 1912 in a neo-Byzantine style, it is the largest Orthodox church in the world, second only to St. Sava in Belgrade.

The centre of Sofia is easy to navigate on foot or by public transport and offers many shops, restaurants and fun activities. If you feel like doing a little shopping without spending a fortune, Pirotska Street is one of the most popular shopping streets in the city and is easily accessible by tram, metro or trolleybus.

The statue of Saint Sophia: i

It is not an exceptional monument, but it is worth visiting for its singular history: it is a statue halfway between an overacted actress and a Greek statue. But that’s not the point: it’s that after the fall of communism, in order to bring Christian symbols back into fashion, they tore down the statue of Lenin and put this statue on the pedestal

The National Archaeological Museum in Sofia:

This museum is worth a visit for two reasons: firstly, because it is housed in what was once the largest mosque in Sofia. Secondly, it contains two treasures that bear witness to the history and culture of this great people: Vulchitrun Lukovit and Nikolayev.

There are 2,000 works by the most representative Bulgarian and foreign artists from all continents: all are represented, with a special focus on India, Japan and Africa.

The mountain range lies 23 kilometres south-east of Sofia. In winter it is a popular ski resort, while in summer it is a destination for hikers and tourists seeking a break from the city.

On the same square as the cathedral, just across the street, is the oldest church in Sofia after St George’s Rotunda (see point 8) and is the place that gives the city its name. Archaeological excavations have established that the Church of St Sophia was built in the 4th century on the remains of several earlier churches and the necropolis of the city of Serdica (Roman Sofia).

A small round church barely 10 metres in diameter. A small jewel built in the 3rd century as a pagan temple, it was transformed almost immediately into a church and is today a kind of marvel surrounded by the concrete of a large building housing the Balkan Hotel, the Presidency of the Republic and the Ministry of the Interior.

Part of the Sofia Regional History Museum, the baths are housed in a colourful neo-Byzantine building built in the early 20th century. The establishment remained in operation until 1986 and once offered the city’s inhabitants swimming pools, saunas and rooms for massages and other treatments.

Today, the spa has been transformed into a museum and is surrounded by a beautiful park open to the public.

Sofia is famous for its nightlife and the best place to immerse yourself in Bulgarian nightlife is the Vitosha district, which is full of bars and discos where you can stay up late. The city also offers a wide range of unique clubs. Vitosha Boulevard is also the heart of luxury shopping in Sofia, where you can find the world’s top brands.

Do you want to go to Sofia? Great! Then click here to go to Bulgaria for your internship.