Culinary specialities in the UK 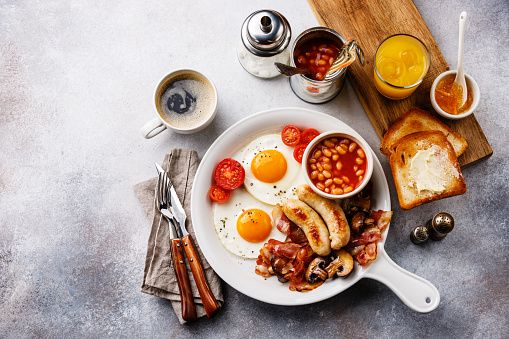 Food in the UK: what are the typical dishes?

What do you eat in the UK? This question is understandable, as it is not a country famous for its cuisine. Here is a list of typical dishes that you can try during your internship abroad!

Breakfast is the main meal of the English, in fact the Full English Breakfast is a very old tradition, which helps to start the day with energy: it includes scrambled or fried eggs, crispy bacon, mushrooms, tomatoes, pork sausages and baked beans.

Fish and chips is one of the most famous and iconic dishes in British cuisine – street food served on every corner. It is a dish that combines a main course of fish, usually cod fillets, prepared in a flour and beer batter, served with a side of chips. This is accompanied by sauces, such as tartar sauce. For the preparation of fish and chips, in addition to “cod”, you can also choose between “haddock”, an Atlantic fish similar to cod, and “plaice”.

Pies are savoury pies filled with various fillings, such as shortcrust pastry, puff pastry or boiled mashed potato shells, and served with mashed potatoes and vegetables. It is a traditional Anglo-Saxon one-pot dish with a variety of fillings, including steak and kidney, which is beef and kidney steak cooked in beer, and chicken and mushroom, which is a creamy chicken and mushroom dish.

Shepherd’s Pie is a lamb and vegetable pie with a soft layer of mashed potatoes. The stuffing is made of minced lamb, carrots, onions and in some cases peas. The crust is made of boiled and mashed potatoes, enriched with milk and butter. This is a very hearty dish, eaten on cold winter days.

Beef is the preferred choice of meat, but Sunday Roast can also be prepared with pork, lamb, turkey or chicken. Potatoes, carrots, broccoli and peas are usually used as side dishes.

Rice pudding is an English spoon cake and It can be served hot or cold, depending on the season.

It is usually flavoured with vanilla, but cinnamon and lemon zest are often added to make it even more aromatic.

Jacket Potatoes are baked cross potatoes in their skins. A small piece of butter is melted into the cut, before a seasoning of cheese, baked beans, bacon, chicken, tuna or mayonnaise is added to the inside, and inserted directly into the cut at the end of cooking. The most popular fillings are baked beans and cheddar cheese.

Chicken Tikka Masala is a dish of chicken marinated in spices and yoghurt, dipped in a creamy, orange-red sauce flavoured with a mixture of spices: masala.

It is eaten with a portion of rice pilaf, which absorbs all the aromas and amplifies the flavour.

It is considered one of the most typical dishes of British cuisine, although its name and ingredients are derived from Indian tradition.

So did it make you want to go? Contact us here to find out more!