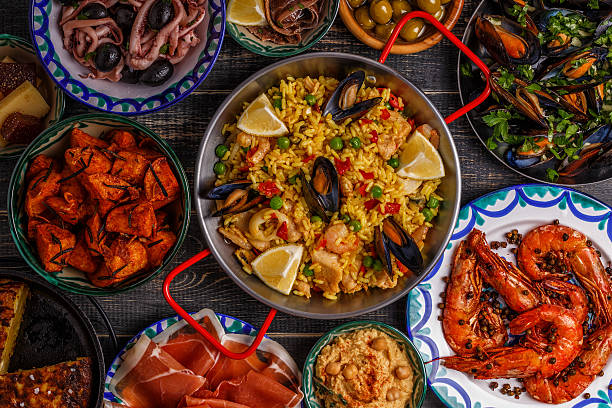 The tasty, healthy, traditional, creative and varied Spanish cuisine is a richness of the country. International Horizons offers you the opportunity to go on an internship abroad in Spain and we give you the culinary specialties of the land of bullskin.

In Andalusia, in the south of Spain, people eat it every day in summer. Andalusian gazpacho is a cold vegetable soup, which can be served as a starter. Fresh, nutritious and easy to prepare, it is an ideal soup to enjoy on hot summer days.

Originating in Valencia, Spain, paella is an iconic traditional Spanish dish made with round rice. You will find all the flavours and colours of Spain in paella, an authentic, generous, convivial and delicious dish.

Eggs, potatoes, onions… That’s it. The Tortilla Espanola is much more than an omelette, it is a convivial dish that brings everyone together.

This is a fermented and dried pork sausage seasoned with spices, including Spanish smoked paprika and sometimes garlic, which gives it a spicy and sweet flavour. It originated on the Iberian Peninsula, but can now be found throughout Spain.

Very popular in Spain, these are cylindrical ropes of fried dough, rolled in cinnamon and sugar and often served with a cup of hot chocolate for dipping. It’s hard to resist the crunchy-sweet doughy goodness.

It looks like a crème brûlée, but this version is flavoured with orange and cinnamon. A dessert, very gourmet, that you’ll love.

Grilled octopus is a delicious dish often flavoured simply with paprika and olive oil. It is a popular dish in tapas bars and seafood restaurants, where it is served on wooden plates with toothpicks. You must try this dish in Spain. It is so tender and tasty.

If you are a vegetarian or even if you want to regulate your meat consumption the Escalivada is for you. It’s a typical Catalan appetizer, tapa or side dish, made with strips of aubergine and red pepper, baked in the oven, and drizzled with olive oil.

So are you hungry now? If you want to go on an internship abroad, this is the place!